skip to main | skip to sidebar

and I started to get a little nervous. Not about the trip but all the actual work it would take to get everything up and running. I like doing research, gathering facts and organizing information in three ring binders. But that can go on forever. I know there will come a time when we just have to go and say the information we have is enough, learn the rest as you go.

Sometimes trying to get all best information or the perfectly right answer is a way to avoid making the hard decision to let go and just go. For now, I will make my binders and be content to be as prepared as I can and discover the rest. Isn't that what it is all about after all?
Posted by Mellissa and Juliano at 10:53 PM 0 comments

We got our first travel book in the mail today!! Juliano is reading it to me in bed as I type this post. I was so excited to get it today but I couldn't even open it until he got home.

Goal 1 - To inspire you to travel revealing the rich rewards that can change your life forever.

Goal 2 - To address all the inhibitions that some people use to persuade themselves they can't travel.

Goal 3 - To empower you to visit places of your dreams

Goal 4- To guide you through one of the most fascinating regions of the world.

Those are some mighty big goals...life changing, empowering, letting go of inhibitions?. Who would have thought a little ol' book could do all for you...who needs a therapist?

This actually sounds like a very useful book. I plan on reading all 549 pages, when Juliano isn't reading it to me or hogging it all to himself. He is driving all 7,000 miles so he needs all the help he can get. He laughed out loud when he read that last line...

Juliano says in Brazil the word vagabond is a slur word, used for someone who is lazy and wants easy money. Our blog title is sort of ironic then, since we are far from lazy and going to be spending lots of moneyI decided to google vagabond to see what sort of interested mix they would throw my way.

I got the usual Wikipedia right off the bat. A vagabond is an itinerant person.. A vagabond is characterised by almost continuous travelling, lacking a fixed home, temporary abode, or permanent residence. Vagabonds are not bums, as bums are not known for traveling, preferring to stay in one location.

Good to know we aren't bums. Of course Merriam AND Webster had to throw their two cents in....Middle English, from Anglo-French vacabund, from Late Latin vagabundus, from Latin vagari to wander, Date: 15th century 1: moving from place to place without a fixed home : wandering.

I did find a surprising array of other vagabond related links, Vagabond Inn, The Vagabond in Miami, apparently a club, Vagabond Sportfishing, the Vagabond Travel Guitar....very cool, something every vagabond should own...book results, video results...The Vagabond's House Inn, which is very ironic, because bondies don't have houses....just look it up in Wikipedia....the Eagle Creek Travel Gear Vagabond Bag

.....I might need one of those ...hmmmm HERE we go.... Your Inner Vagabond Coffeehouse and World Lounge, complete with music, bellydancing, comfy couches and java.... who would have thought? My inner vagabond is all about coffee, bellydancing and the world's biggest living room as this place is called. That is pretty cool.Guess its not so bad to be a vagabond....
Posted by Mellissa and Juliano at 10:41 PM 0 comments

Solio solar power, can we really make a difference?

Since we know we want to be as environmentally friendly as possible, offsetting our transportation by donating to the Carbon Fund and leaving as few footprints as possible, we decided to look into transportable solar powered chargers for all electronic gadgets that some how we just cannot live without. So I found the Solio

solar powered battery, which sort of looks like a bug but apparently works well. It has lots of interchangeable charging tips for different gadgets, a USB cable and a wall attachment.

The more you use your Solio, the less carbon dioxide you emit into the atmosphere. From day one, you will generate your own free, clean electricity directly from the sun. The amount of energy used to create your Solio has been negated by removing unsustainable processes and using carbon offsets. This means that your Solio is a net producer of energy from the very start. 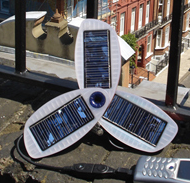 Solio has been designed with a focus on sustainability: the ability of the environment to assimilate and transform any emissions from the manufacturing of Solio into a positive input that allows other earth systems to flourish. We take great care to try and find components from the most sustainable sources.

Perhaps the biggest difference you can make is to use your Solio to educate others about renewable energy and climate change. Solio was created to bring renewable energy mainstream and our customers play a leading role in this transformation.


The Solio has a couple of different versions ranging from $170 to $80. Sad as it is, that price range is a bit more than we want to spend. So we checked out other options and found great prices on Amazon.

I remember thinking I wanted to get one for my dad as a gift but I know we would appreciate it more on our trip. The sun is the best source of energy and where we are going maybe the only source of energy. Now if we could just come up with a solar powered car then we would be good to go.

I am excited to get ours in the mail and try it out in my house. I wonder how much my electric bill would go down if I charged my phone and laptop with the Solio. I'll try it out and let you know!

www.solio.com
Posted by Mellissa and Juliano at 4:35 PM 0 comments

My boyfriend, new boyfriend mind you, and I have decided that in a year and a half we are going to quit our jobs, relocated to southern CA and drive the Pan American highway all the way from Mexico to Panama then make our way through South America to his home in Brazil. We must be absolutely nuts....stark raving mad.

I am so excited I can hardly stand it...and I just don't know where to begin. So I thought I would start a blog of my journey to get to my journey. My plan is to blog each step of the way, offer solutions I find, lament about problems I run into, pass on suggestions and just basically share my path to what I hope will be a turning point in my otherwise mundane sort of life.

I have nothing tying me down so why not venture off to the great unknown and suck up all the life I can while I have the chance.

I hope you enjoy my journey as much as I enjoy sharing it with you.
Mellissa

PS Juliano, the other half, is at work, but this is his adventure too, so I post for both of us.
Posted by Mellissa and Juliano at 3:04 PM 0 comments 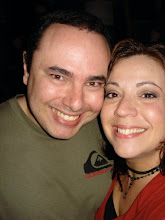 Mellissa and Juliano
Cambridge, MA
Mellissa - Grew up in small town Tennessee but knew she’d never stay. Her parents traveled the world for two years before she was conceived, so the world is in her blood. A former documentary producer and non-profit junkie, she paid off all her credit cards and free from that burden, decided to quit her good job and go have the adventure that would not take no for an answer. She speaks a little Spanish, just enough to get by.
Juliano – Grew up in Santa Catarina, Brazil with a love of punk music, long skateboards and the beach. An avid photographer and soccer fan, he came to the U.S. for an adventure and now it seems he has found one...or two. Funny thing, he had to leave Brazil in order to find himself. He is taking the long way home, driving through Central and South America. He is also a very good driver.
The Couple – Mellissa and Juliano knew each other for a little over three years before they got together. She says he always had a crush on her…sometimes he agrees…with a grin. After five months of wooing and many date offers, Mellissa finally accepted. They soon discovered that they are the best thing to happen in the each other's life.